After receiving his school leaving certificate and working for a while in a printer?s office, André Chéret began his career as a professional illustrator with a company designing cinema posters. He was also publishing illustrations in various periodicals at the time. During his military service, he contributed to La Revue des Forces Françaises, and so avoided having to fight in Algeria. It was for this magazine that he produced his first comic strip, Nicéphore Dupont, the story of a grenadier in Napoleon?s time. In 1961, Chéret returned to civilian life and to his work as an illustrator (for Radar, Paris Jour, Mireille...) but leaned increasingly towards comic strip, working on straightforward biographies for Coeurs Vaillant, humorous stories for Fripounet and adaptations of the novels of Arthur Conan Doyle for Mondial Presse, an agency that placed cartoons in the regional daily papers. The following year, Chéret joined the team at Vaillant magazine, where he took over as illustrator of the Bob Mallard series. Seven years later, Vaillant became Pif Gadget and Chéret contributed from the first issue, creating a series that would change his life for good ? Rahan. From now on, he would continue to illustrate the life of the ?fils des âges farouches?, with Roger and later Jean-François Lécureux writing the scripts (the latter taking over after his father?s death). Chéret worked on several other series alongside this one ? Domino (scripted by Greg and later Jean Van Hamme), Michel Brazier (with Jean-Michel Charlier), Protéo (with Jean-Gérard Imbar), Ly-Noock (with Michel Rodrigue) and Le Dernier des Mohegans (with Pierre-François Mourier) ? and also adapted Jacques Malaterre?s documentary Le Sacre de l?Homme. 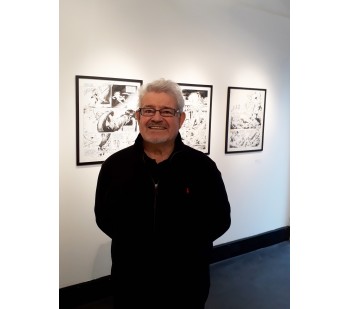