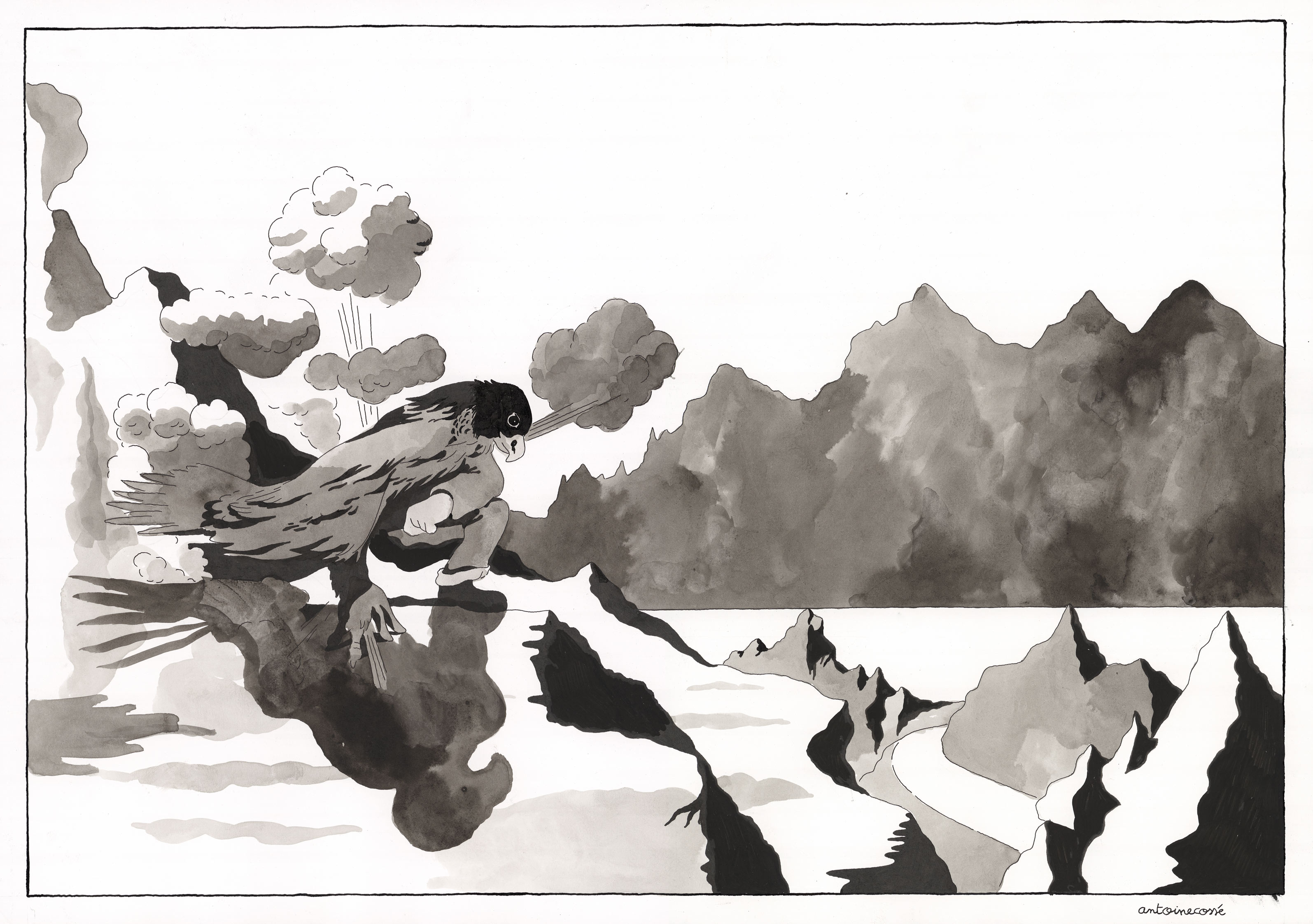 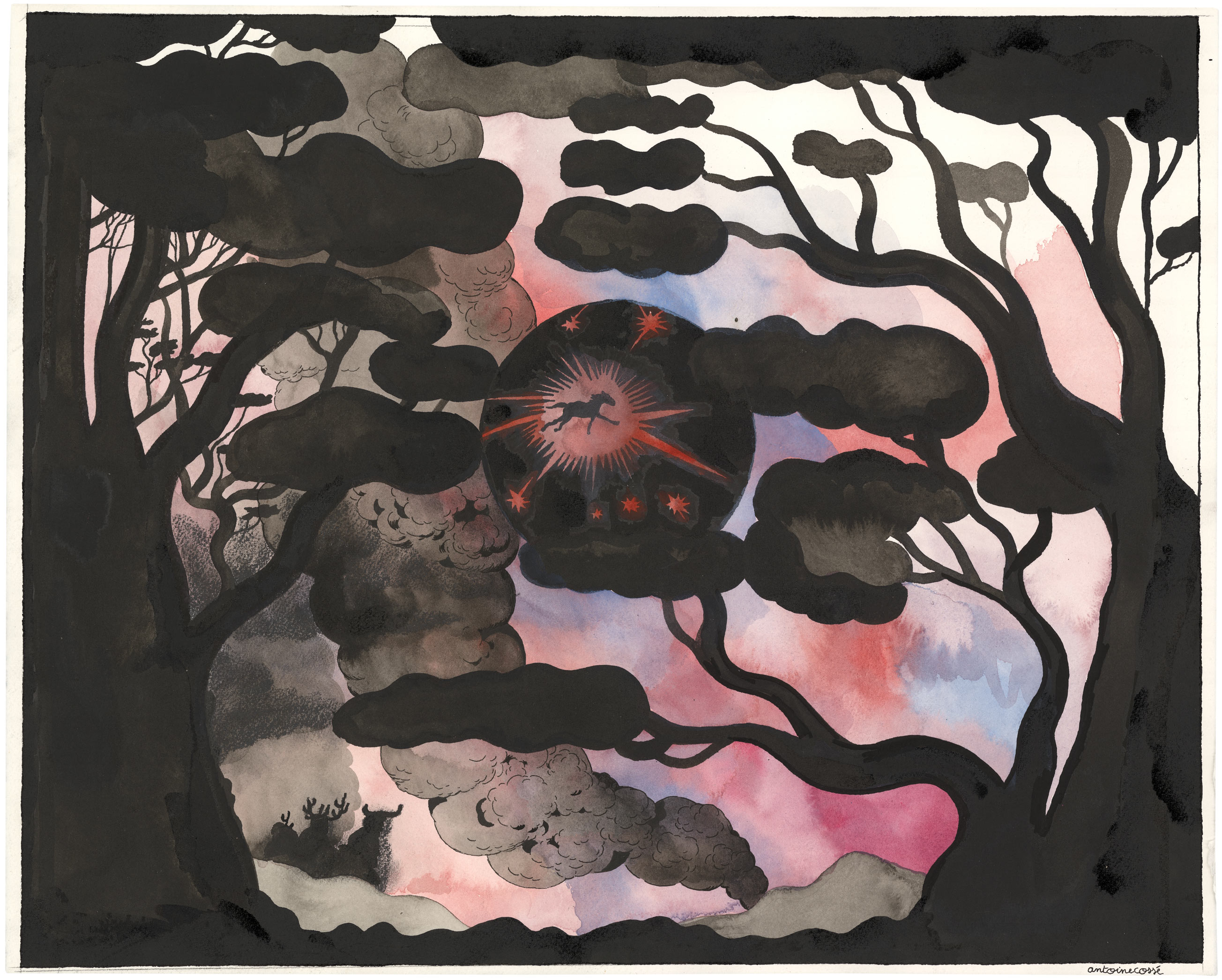 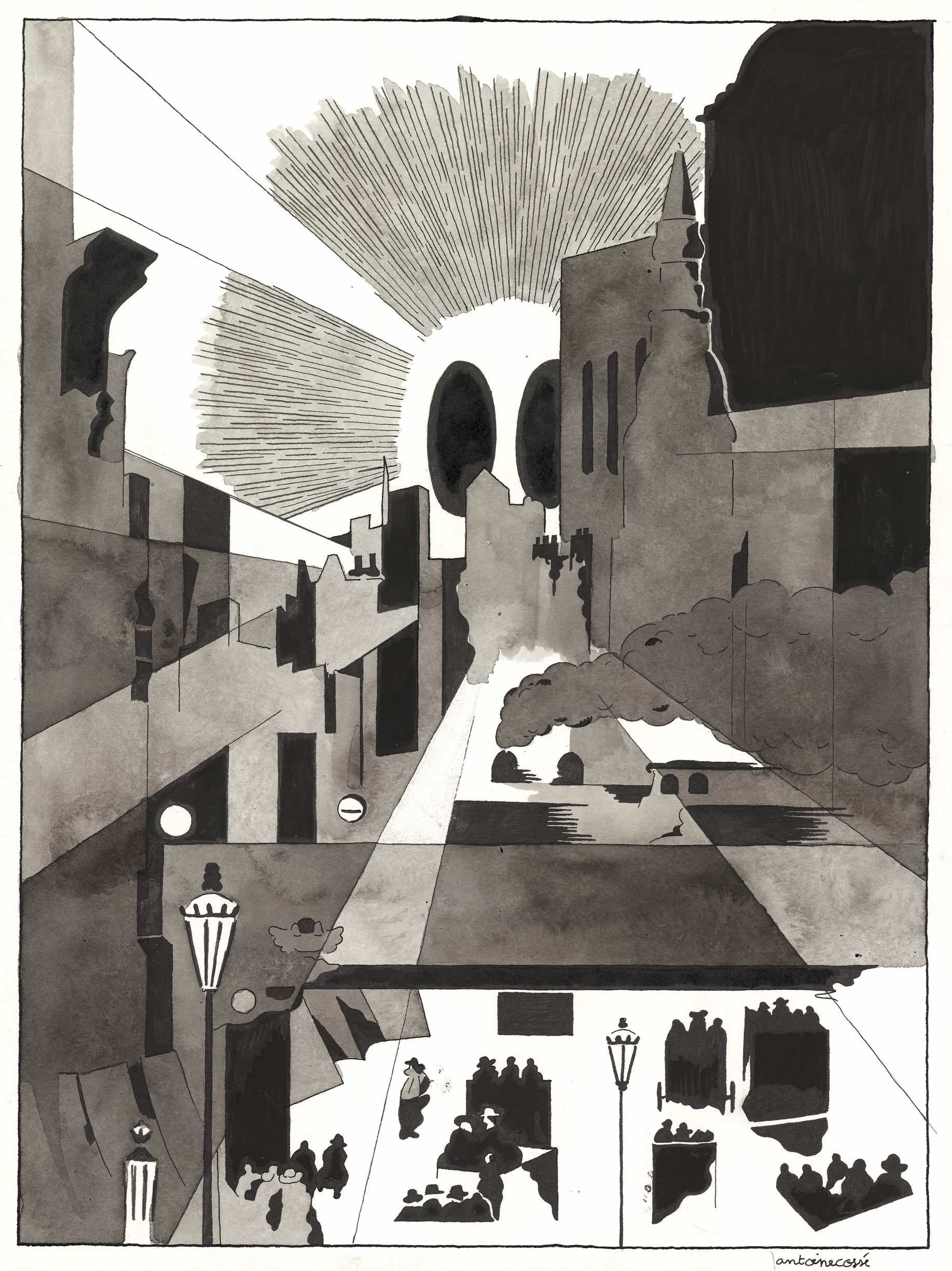 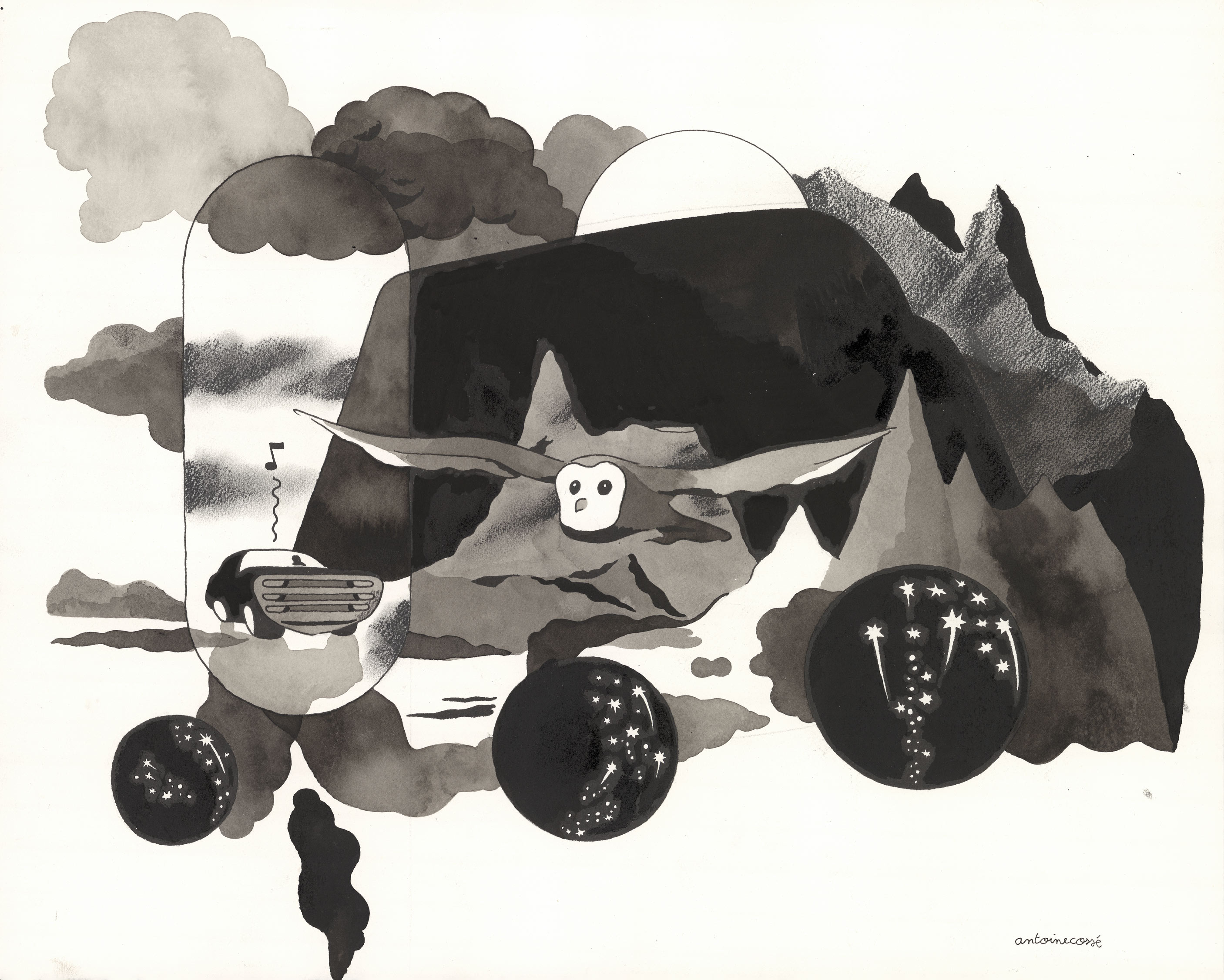 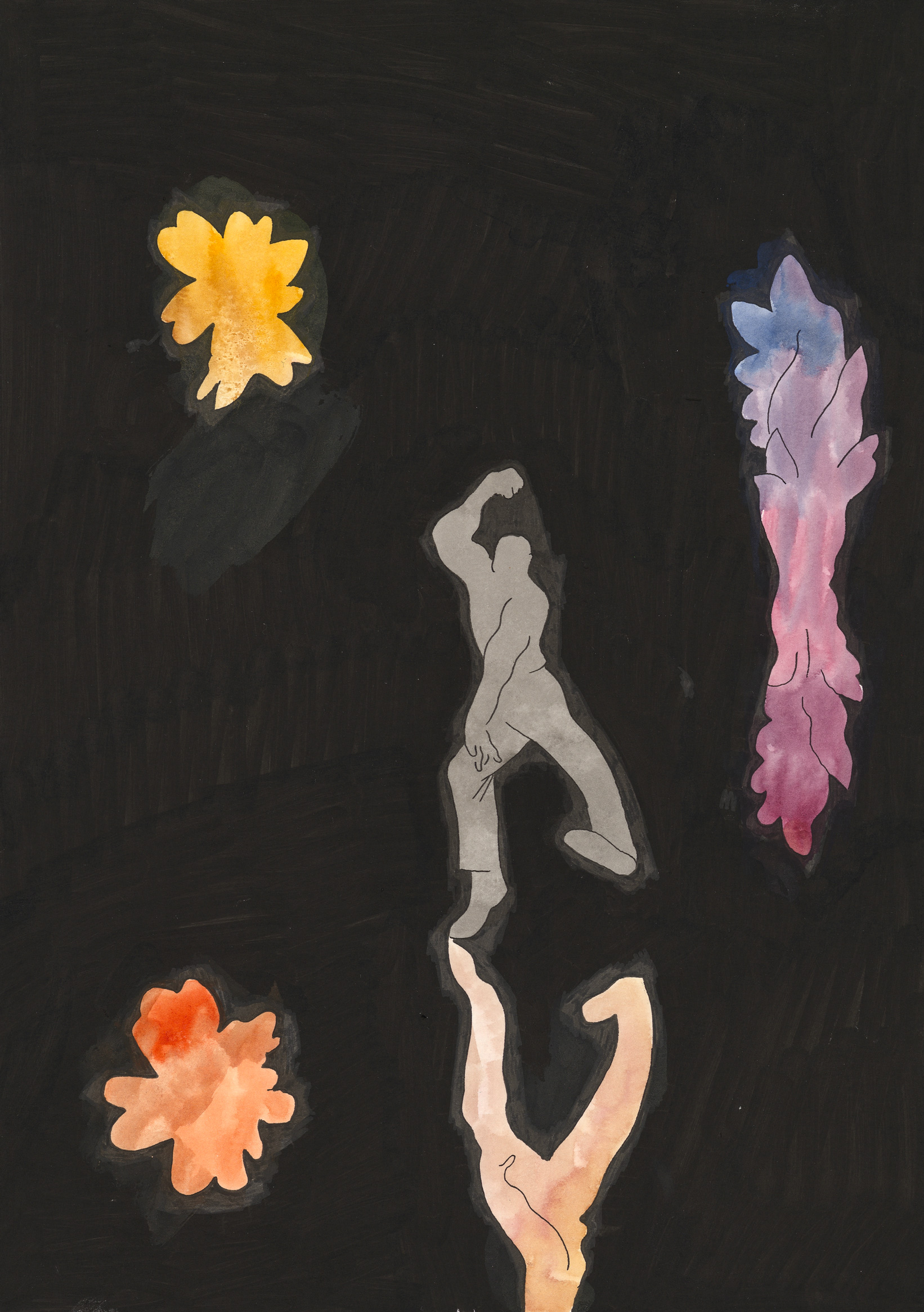 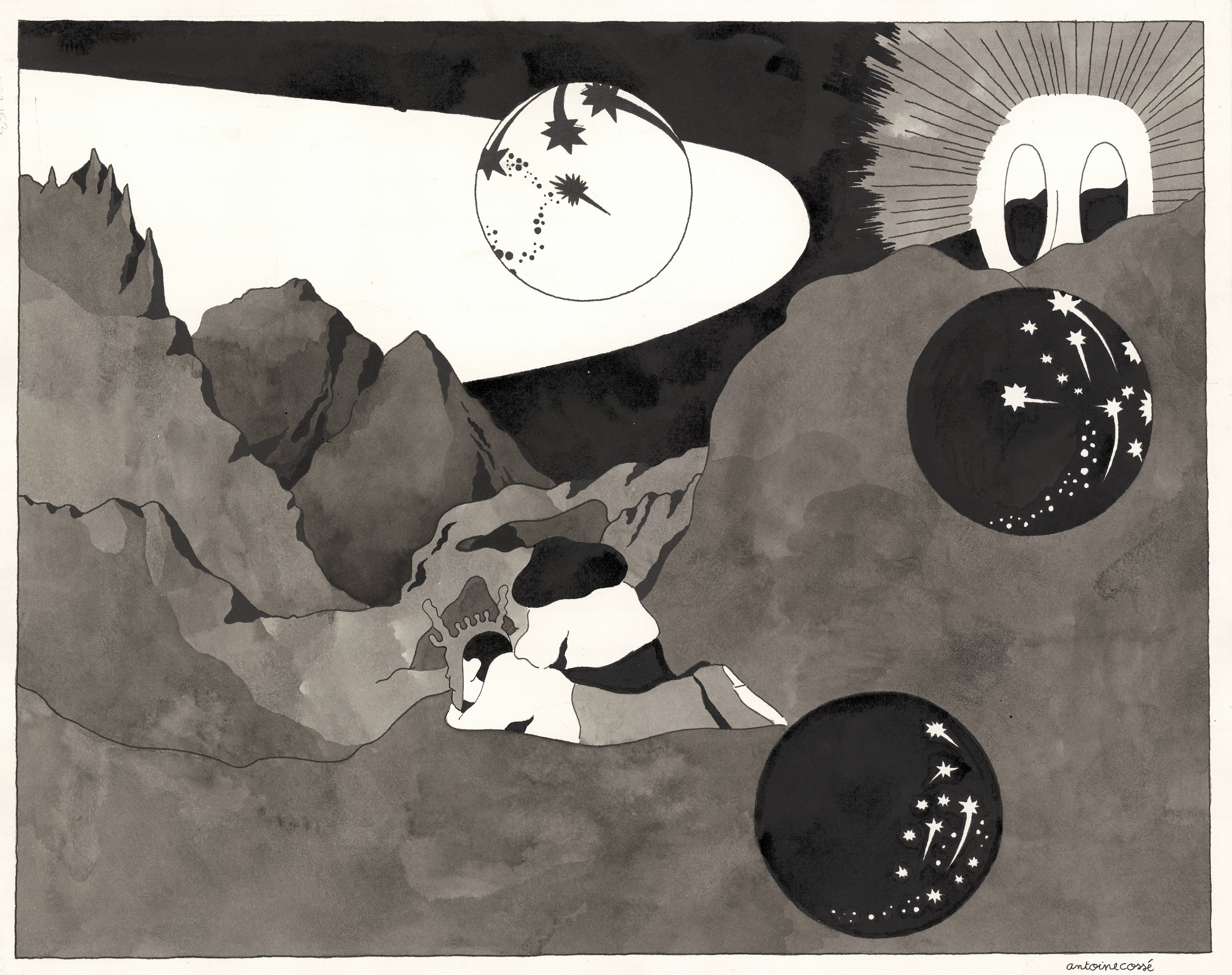 From 3 to 26 November 2022, Huberty & Breyne is delighted to be hosting an exhibition in its Miromesnil gallery dedicated to the work of Antoine Cossé. On show will be some thirty or so plates from Metax in addition to six A2-format drawings described by the artist as “giant bookplates”. Four of these drawings are new works, while two are taken from the pages of Metax itself, a dystopian tale which sees Cossé skilfully combining techniques in the manner we have come to expect of him – Indian ink, wash, felt-tip pens of varying thicknesses, and also watercolour, the episodic use of colour being part and parcel of the narrative.

Originally from Paris, at the age of twenty Cossé moved to London, where he still lives. He graduated from Camberwell College of Arts in 2006 and rapidly made a name for himself as an illustrator, working for The Guardian, The New York Times and the French cultural magazine Les Inrockuptibles while also designing posters, notably for Unicef, and album covers.

Cossé broke into the world of comics through his association with independent, alternative publishers – the London-based Breakdown Press, followed by Les Requins Marteaux and Cornélius in France, L’Employé du Moi in Brussels and Fantagraphics in Seattle. From one book to the next, it is unclear whether it will appear in English or French first, and what Cossé will choose as a theme. In La Baie des mutins (Mutiny Bay), he tells the story of a lost Captain Magellan; La Villa S. is in the BD Cul collection; Showtime shows us a magician and his avatars at work; NWAI (not translated into French) is set in the Villa Noailles designed by Robert Mallet-Stevens…

Metax, Cossé’s fifth album, came out in the United States in February 2022 and from Cornélius on 25 August. It was originally intended as a children’s story, but the advent of Covid and the changing political scene steered Cossé towards a science-fiction tale inspired by contemporary ills. Metax has brought extraordinary riches to the dystopian kingdom of Kronin; but the mineral can no longer be found, and the kingdom is in decline. The countryside is ravaged by efforts to source the mineral; a virus causes stars to appear in the eyes of the younger generation, and youthful terrorists wearing animal masks endeavour to salvage a modicum of humanity… This is a strange, enigmatic and often painful book where page after silent page, drawn in dusky tones and veering towards abstraction, alternate with passages of crisp dialogue. Antoine Cossé’s Metax is a work of extraordinary poetry and graphic originality.