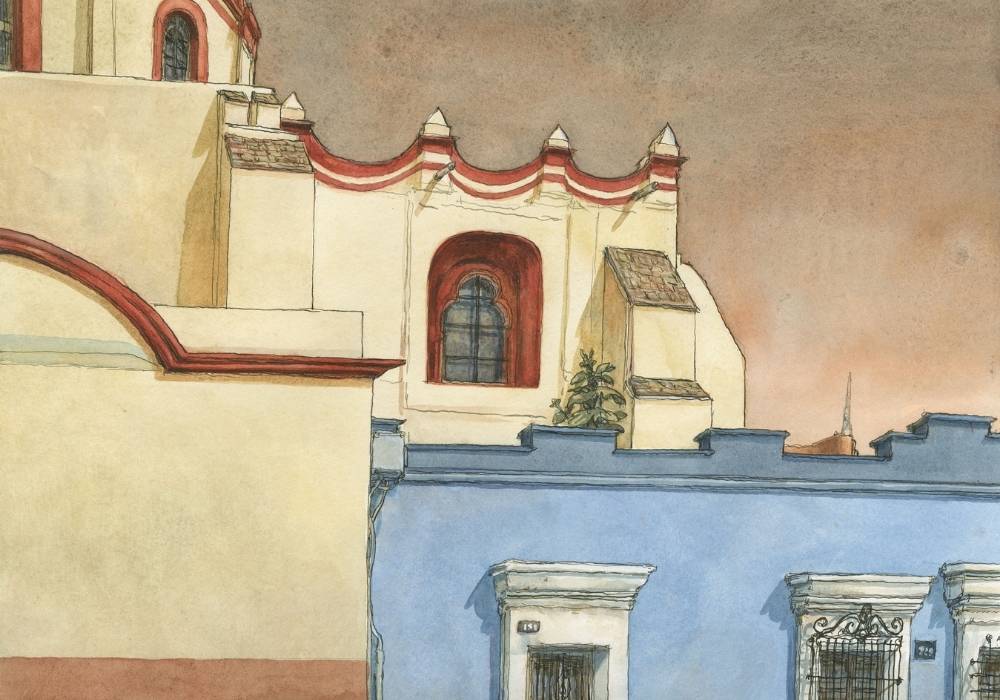 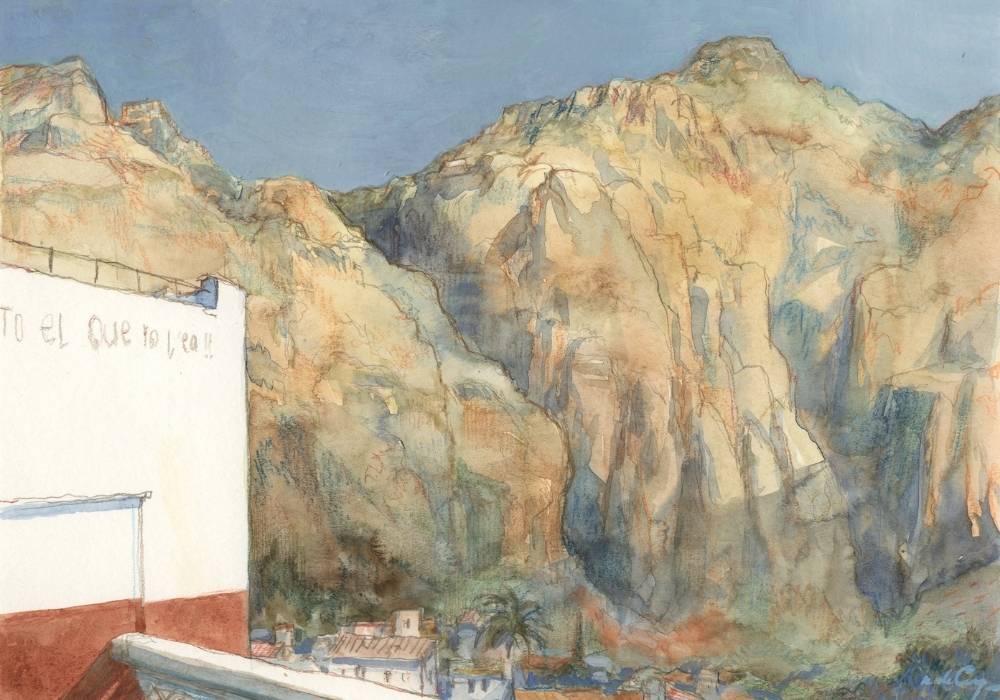 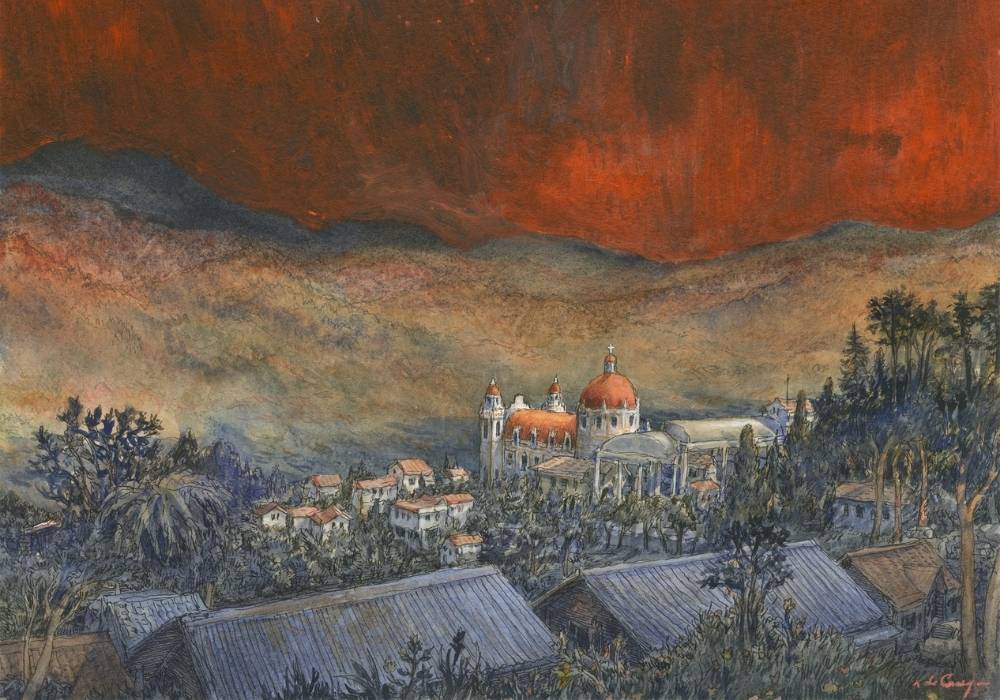 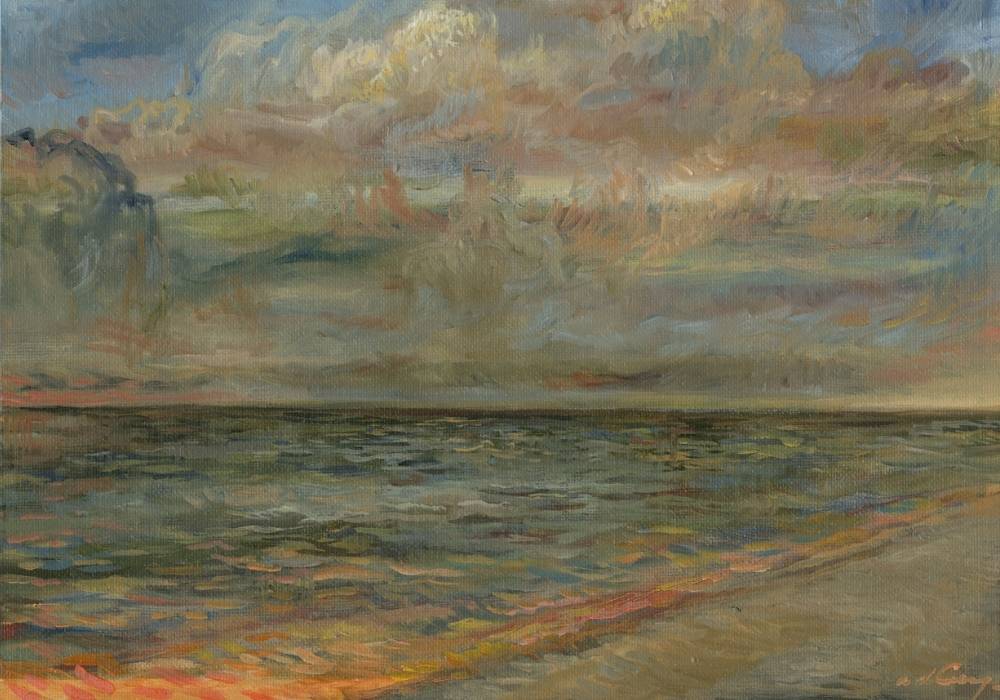 "I imagined Mexico without knowing it; I approached it in an intuitive way. Mexico is a fascinating city. Organic. The light, the colours and the different architectural strata are extraordinary. It's a paradoxical city where opposites coincide. And these are all baroque elements that also exist incidentally in my own universe."

In 2014, Louis Vuitton invited Nicolas de Crécy to produce a personal vision of Mexico for the designer's Travel Book collection. The baroque is a cornerstone of de Crécy's graphic universe and for such an artist Mexico was an ideal destination. Using Mexico City as his base, he explored the surrounding area: Tepoztlán, Cuetzalan, Oaxaca and the nearby mountains. He took Mexico's iconic Highway 175 all the way to Puerto Ángel and the little towns and settlements that perch beside the Pacific Ocean. It was a trip that would inspire a whole raft of works capturing both Mexico's diverse architecture and the exuberance of its culture.

Nicolas de Crécy exhibited his notebooks at Mexico's Museum of Modern Art in 2017, and at the Mexican Cultural Institute in Paris in 2018, and has continued to explore his response to Mexico, fascinated by its wealth of graphic and pictorial potential. And Huberty & Breyne has chosen to celebrate this multi-disciplinary artist at the first Art Paris Art Fair to be held in the Grand Palais Ephémère, designed by leading architect Jean-Michel Wilmotte. This solo show will treat viewers to some forty or so works by the artist: a selection of drawings published in Travel Book Mexico (Louis Vuitton) as well as a number of unpublished works including small- and large-format watercolours, oils and charcoals.

The hugely versatile Nicolas de Crécy has long been pushing back the boundaries of comic strip to construct his multi-faceted universe. A visual artist, writer and creator of comic scripts and the recipient of a great many prestigious prizes both in France and abroad, he has been exploring different fields of artistic endeavour for over 30 years now, each of them enriching the others and contributing to the creation of a singular oeuvre.

From his earliest publishing success (Foligatto, 1991) to such graphic and stylistic experiments as Le Journal d'un fantôme (2014), the author of Le Bibendum céleste (1994- 2002) has continued to broaden his horizons. Nicolas de Crécy returned from his Mexico adventure, in 2014, with notebooks crammed full of drawings but also impressions of the light and the atmosphere of the country which have continued to feed his imagination, long after his return.

Luxuriant vegetation, majestic temples, brightly coloured death's heads, urban sprawl? Nicolas de Crécy takes the viewer right to the heart of this megalopolis, a place freighted with history and teeming with the ghosts of the past. Criss-crossing the ancient city, he captures on paper its different atmospheres and moods, and these have continued to inspire the new works that Huberty & Breyne will be showing at Art Paris.