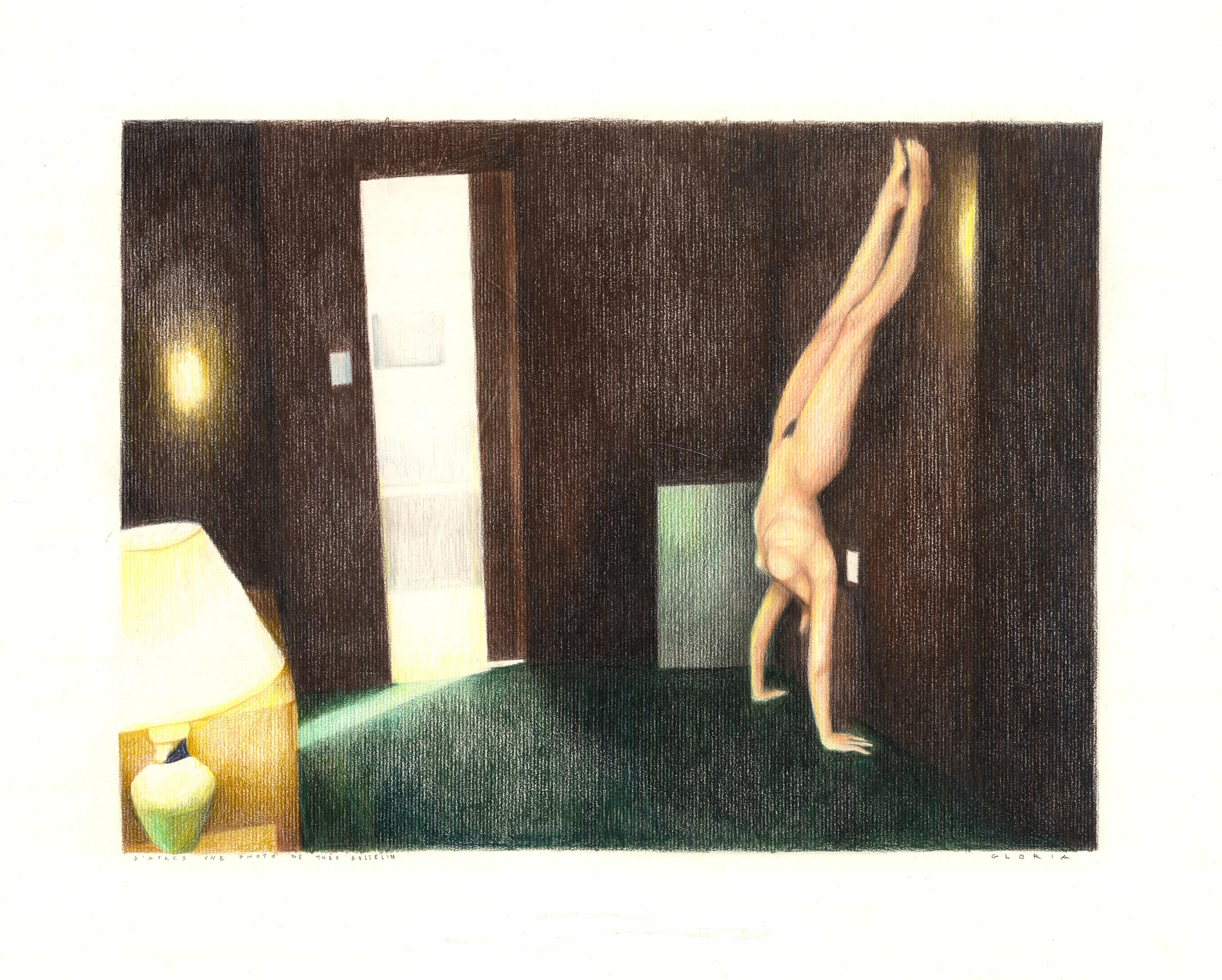 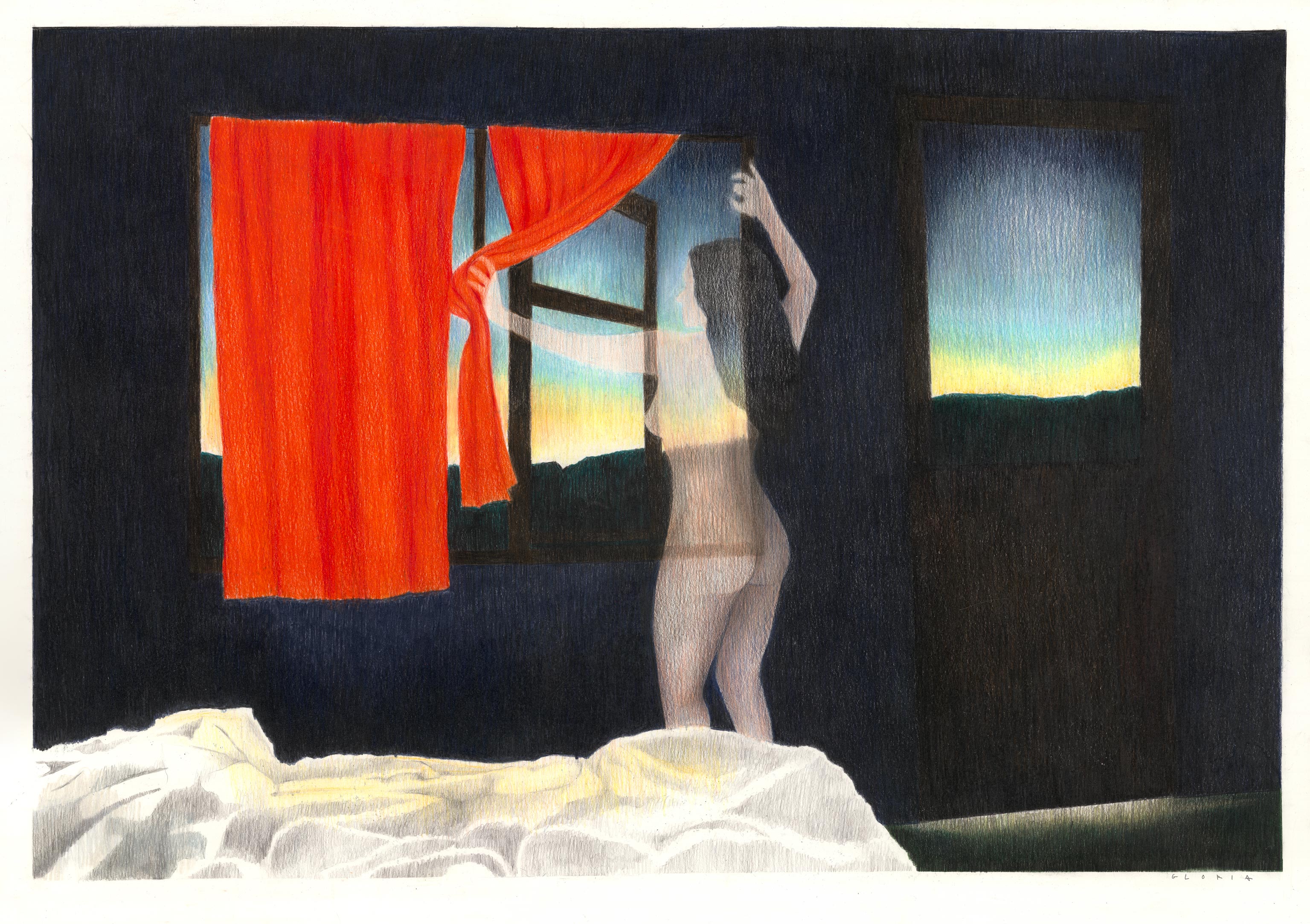 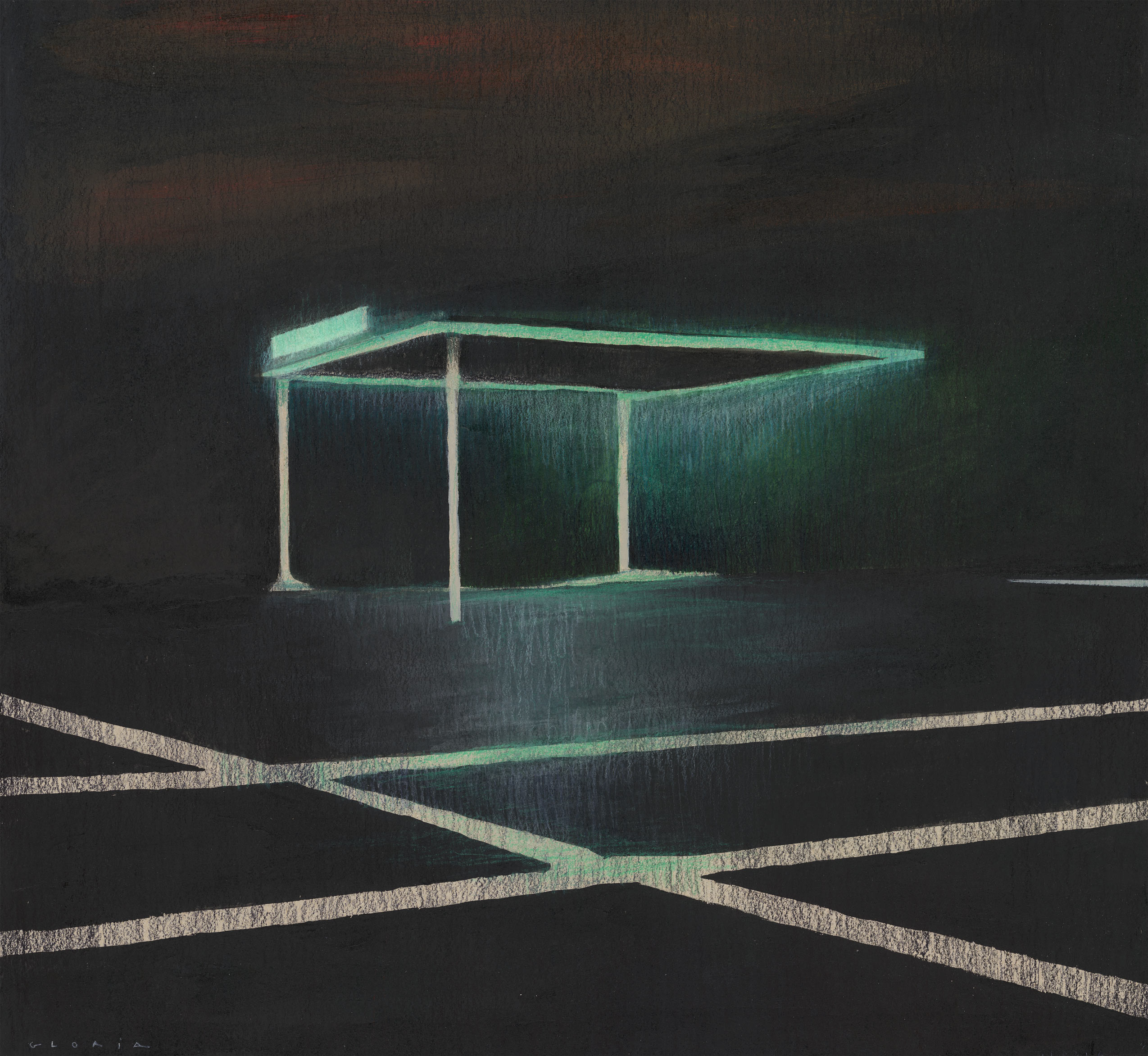 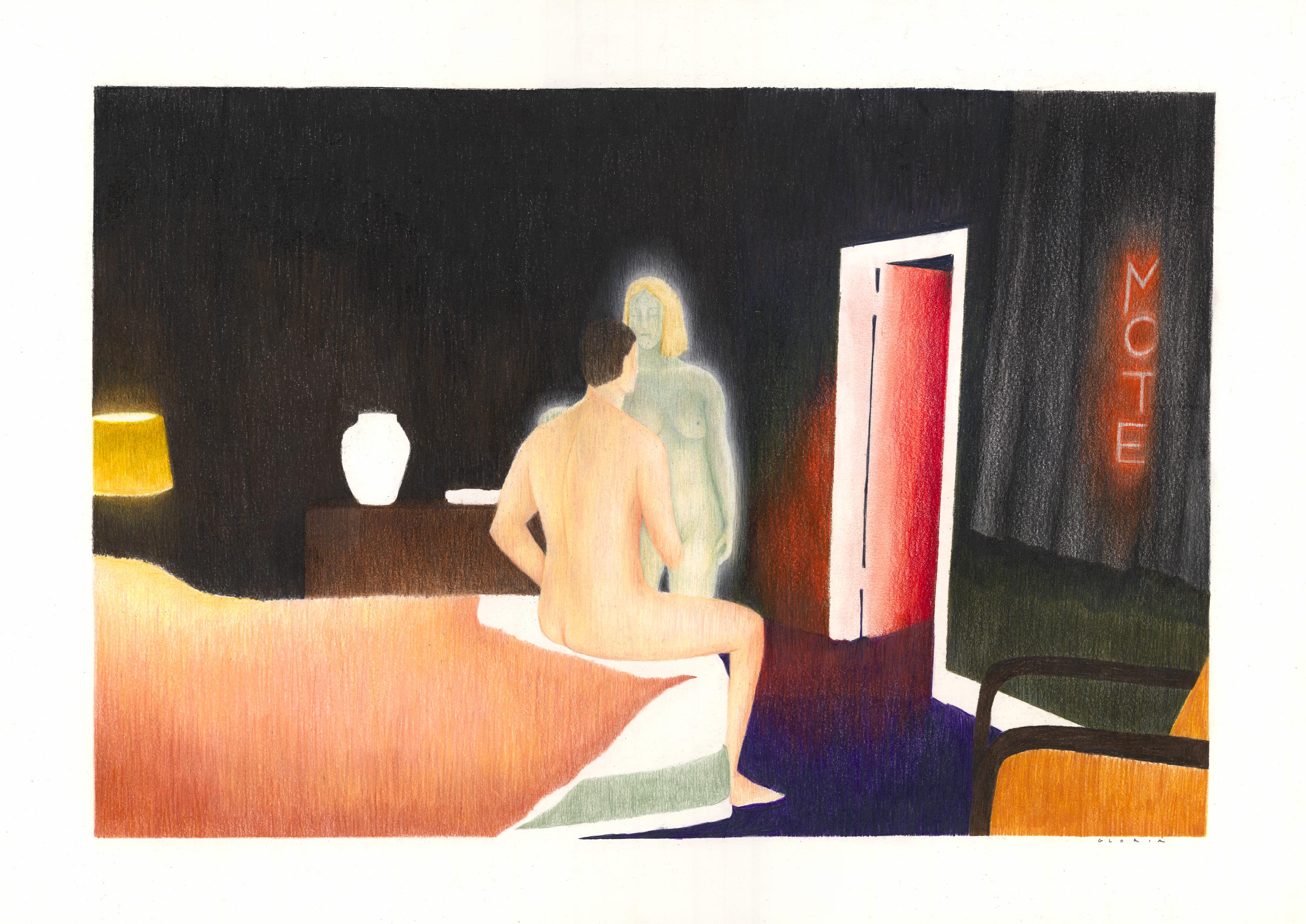 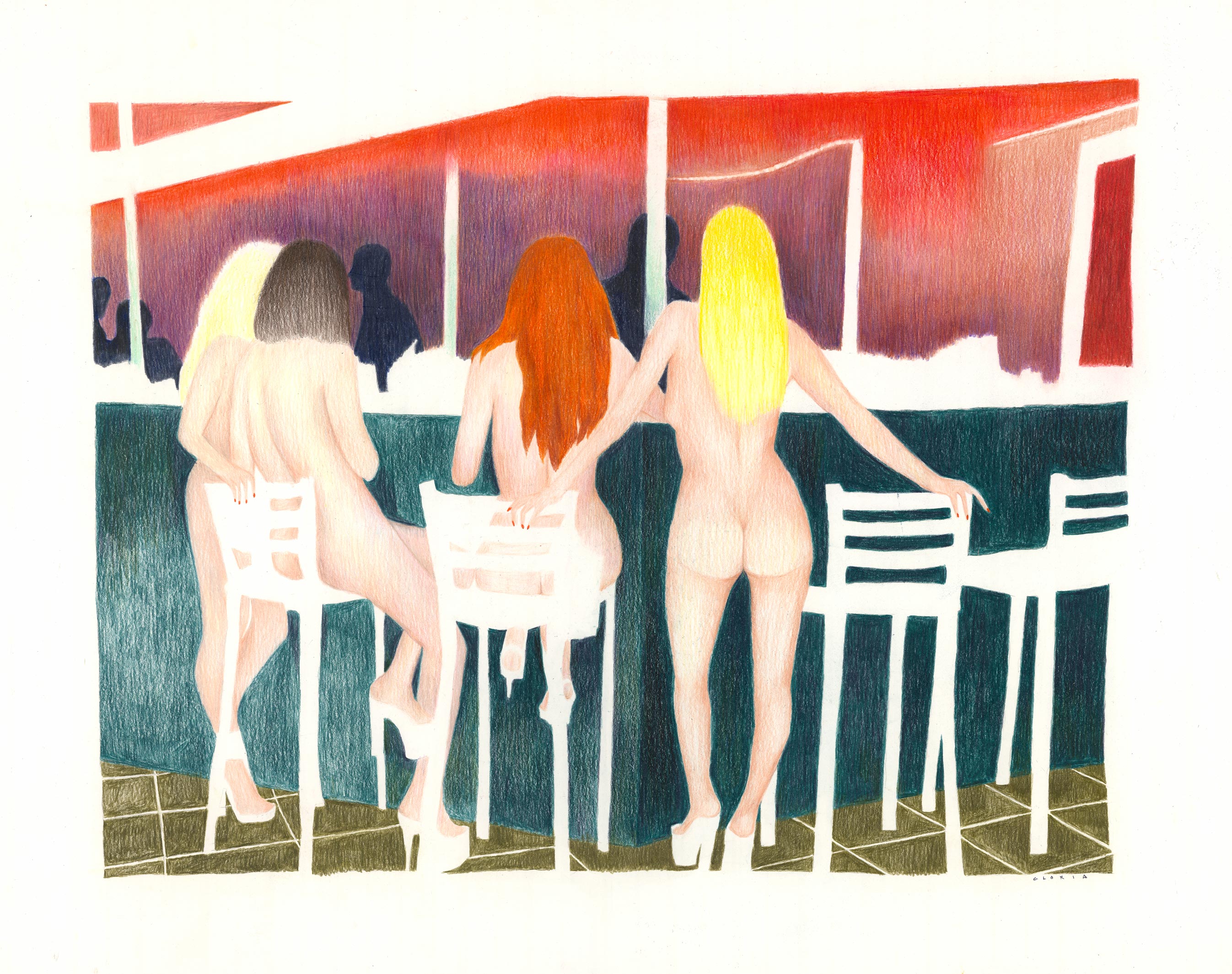 From 23 June to 27 August 2022, the Les Arts dessinés Gallery in Paris is showing a selection of drawings by Dominique Corbasson and her daughter Gloria Avril. Corbasson’s works are the story of Paris. Avril’s are inspired by North America’s roadhouses. Two different worlds. Two artists inviting us to accompany them on a journey.

“I was born into drawing!” Gloria Avril announces. The daughter of two artists, Dominique Corbasson and François Avril, Gloria Avril began wielding pencils and brushes from an early age. It was something she took for granted, “but also an escape route, a bubble, a cocoon”, she says. One of her childhood memories is of the exquisite corpses that her parents made with their illustrator and artist friends. She did her bac in applied arts and enrolled at the Duperré School of Applied Arts, and today she works in her Paris studio for the most part. “I need my things around me”, she says, “my books, my drawings, my coloured pencils, dozens of them, some of them once my mother’s.” This is Gloria’s world, which she shares on Instagram.

This is Gloria Avril’s very first exhibition – and coincidentally the first time her drawings have been seen alongside her mother’s work. The drawings she has chosen to show are a series devoted to “roadhouses”, those roadside bars in North America frequently located in the middle of nowhere, on some endless highway, on the edge of a desert… “I really like those God-forsaken places you see in films by Jim Jarmusch, David Lynch and Dennis Hopper”, she tells us, describing her exhibition as a journey with milestones along the way.

By superimposing marks in a range of coloured crayons, Avril creates dusky, night-time atmospheres that have something of the road movie about them, reminding us of the likes of Kerouac or Wenders journeying across North America’s vast open spaces. Figures rarely appear in her work and when they do, they are ghostly, barely there – dreamy, nostalgic figures, observers merely, sometimes naked, sometimes dressed in white, discreet but powerful presences. Gloria Avril’s style of drawing is rhythmical, clean, confident and assured already. “With this first series, I have developed a new way of drawing”, she says. “A technique that is simultaneously slow – which suits me because I like to take my time – and quick, instinctive, corresponding to an urge to recreate on paper the scene that I am seeing in my mind’s eye. I need to really concentrate so as not to lose that image. So, I need to draw fast.” Describing another feature of her style, she goes on: “I don’t fill in the background. I leave some of the paper white so the drawing can breathe, and light can get in.” This is a little habit she has borrowed from her mother, as Avril acknowledges.

“I was keen to have an exhibition. I felt that it was the right time”, Gloria Avril says. She was very touched by the Les Arts dessinés Gallery’s proposal. “I feel proud and honoured to be able to exhibit for the first time alongside my mother. Our worlds are very different, but it’s touching that she should be there, alongside me, through her drawings.”