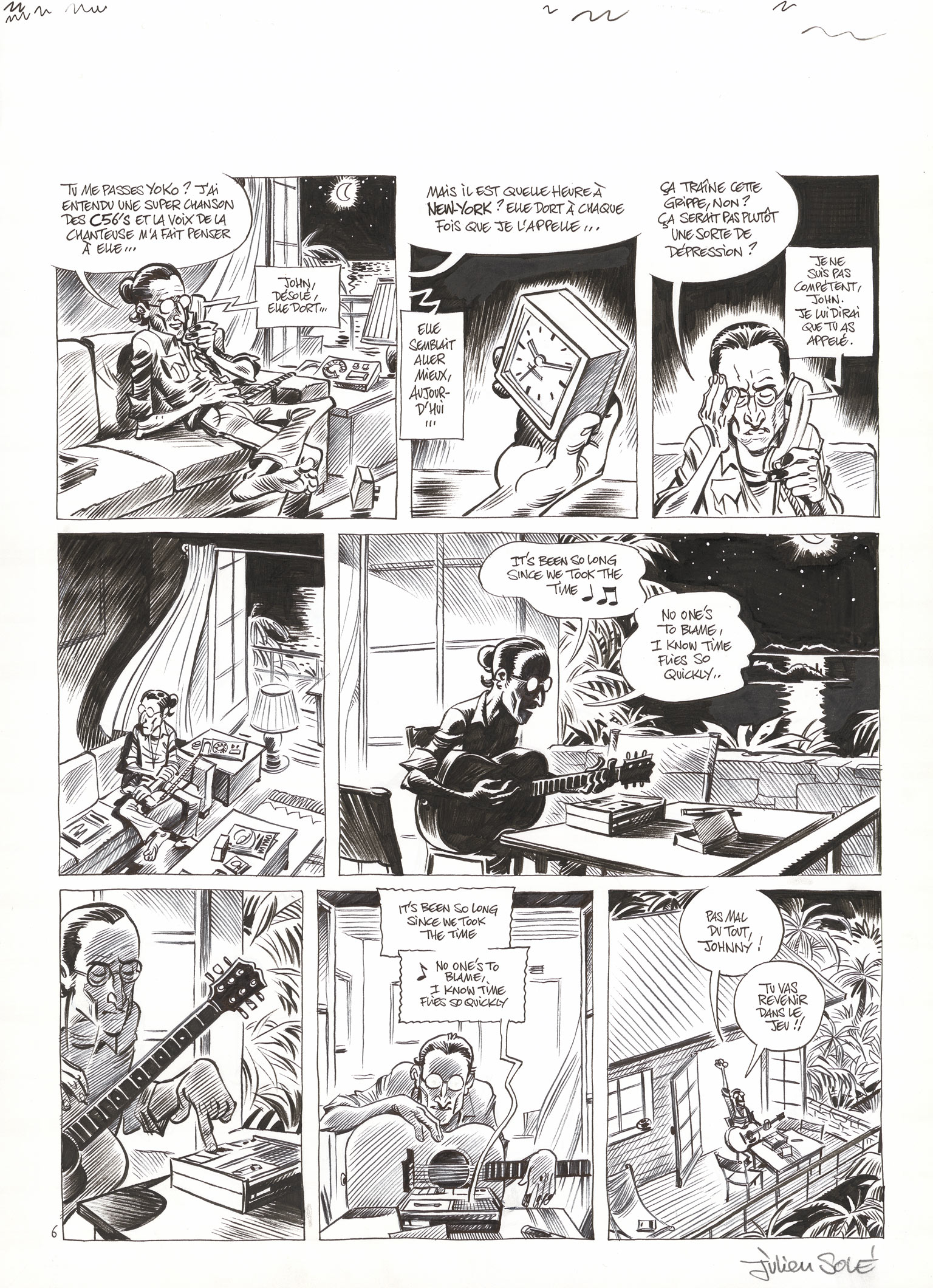 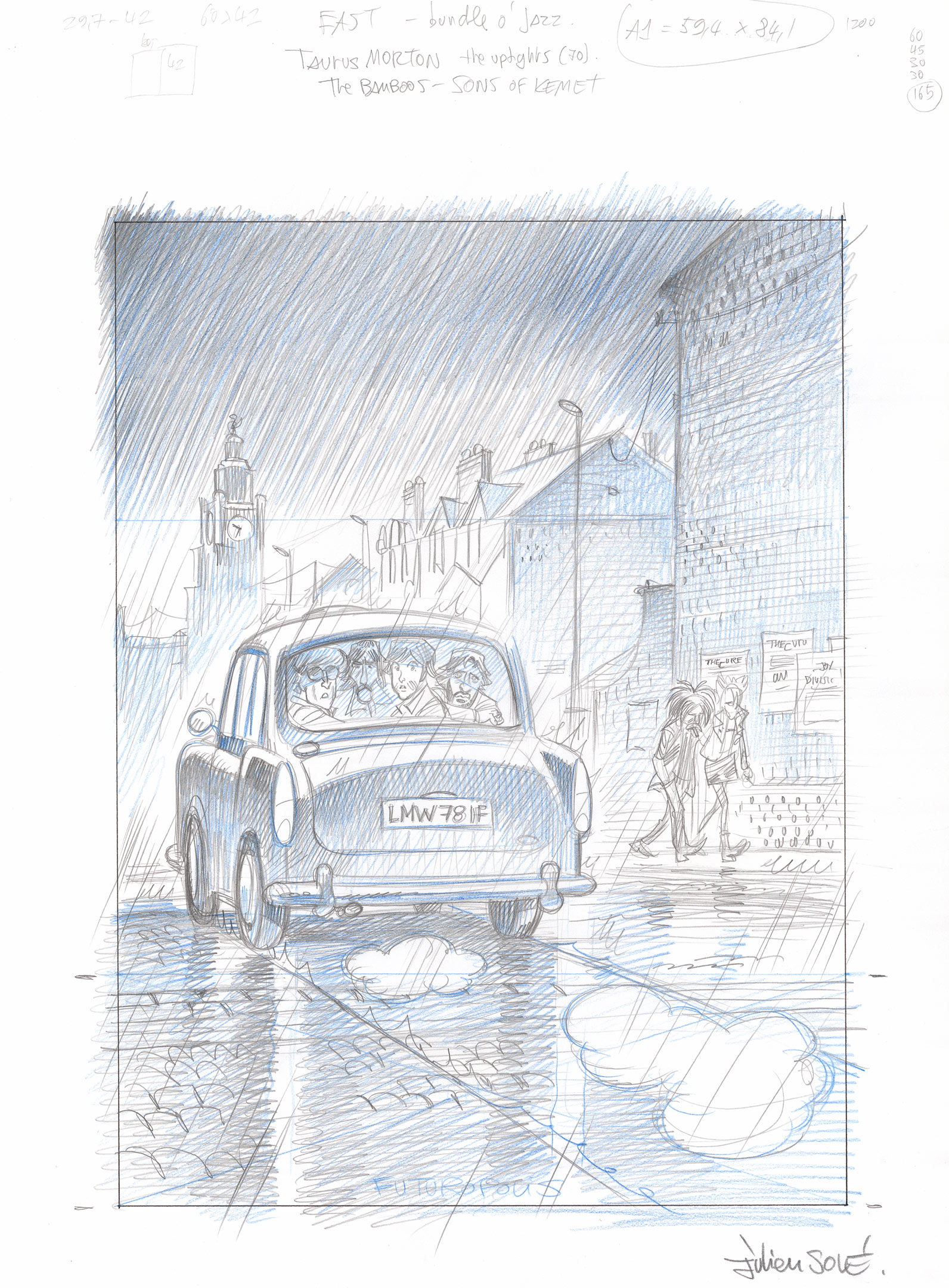 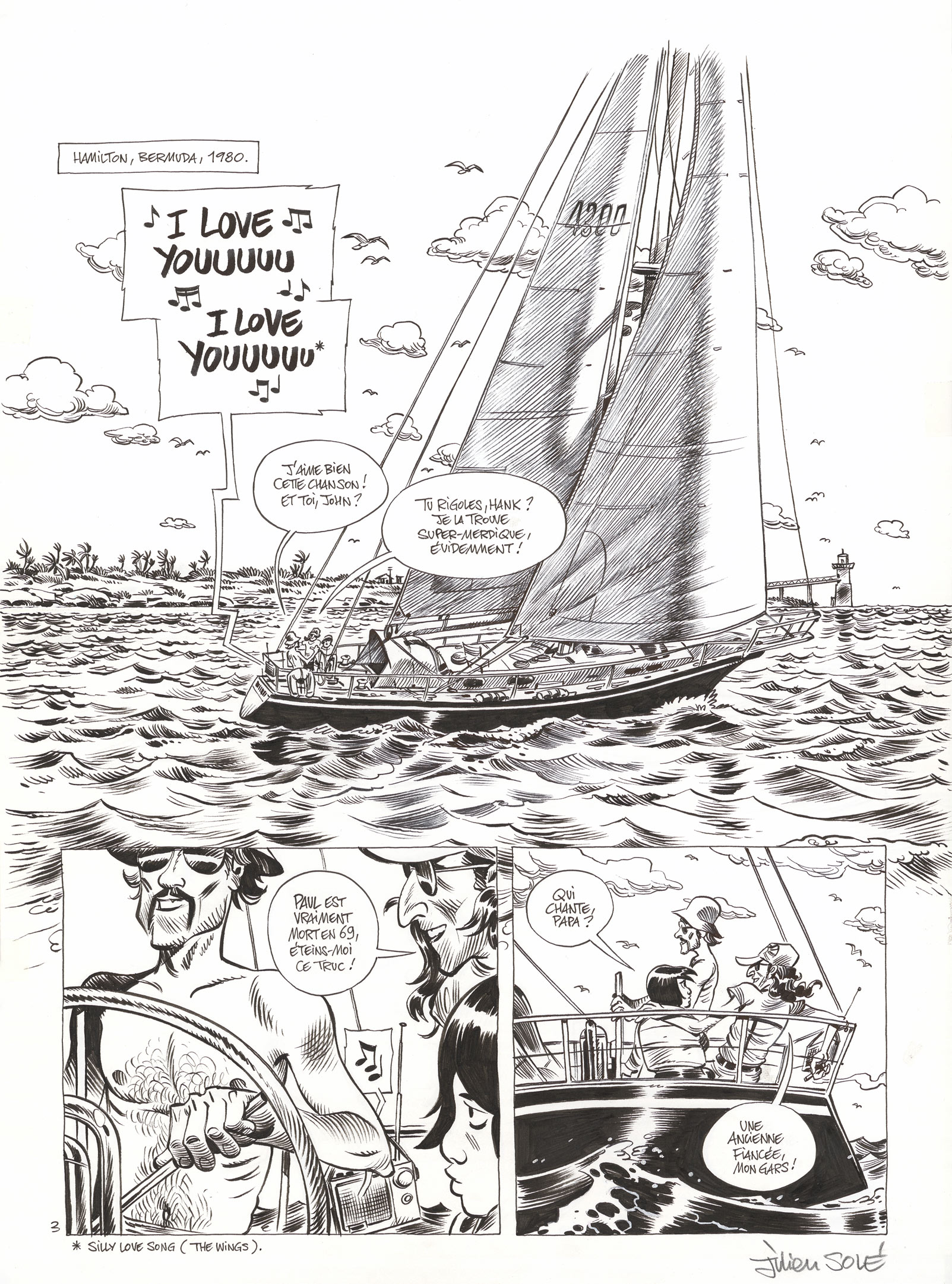 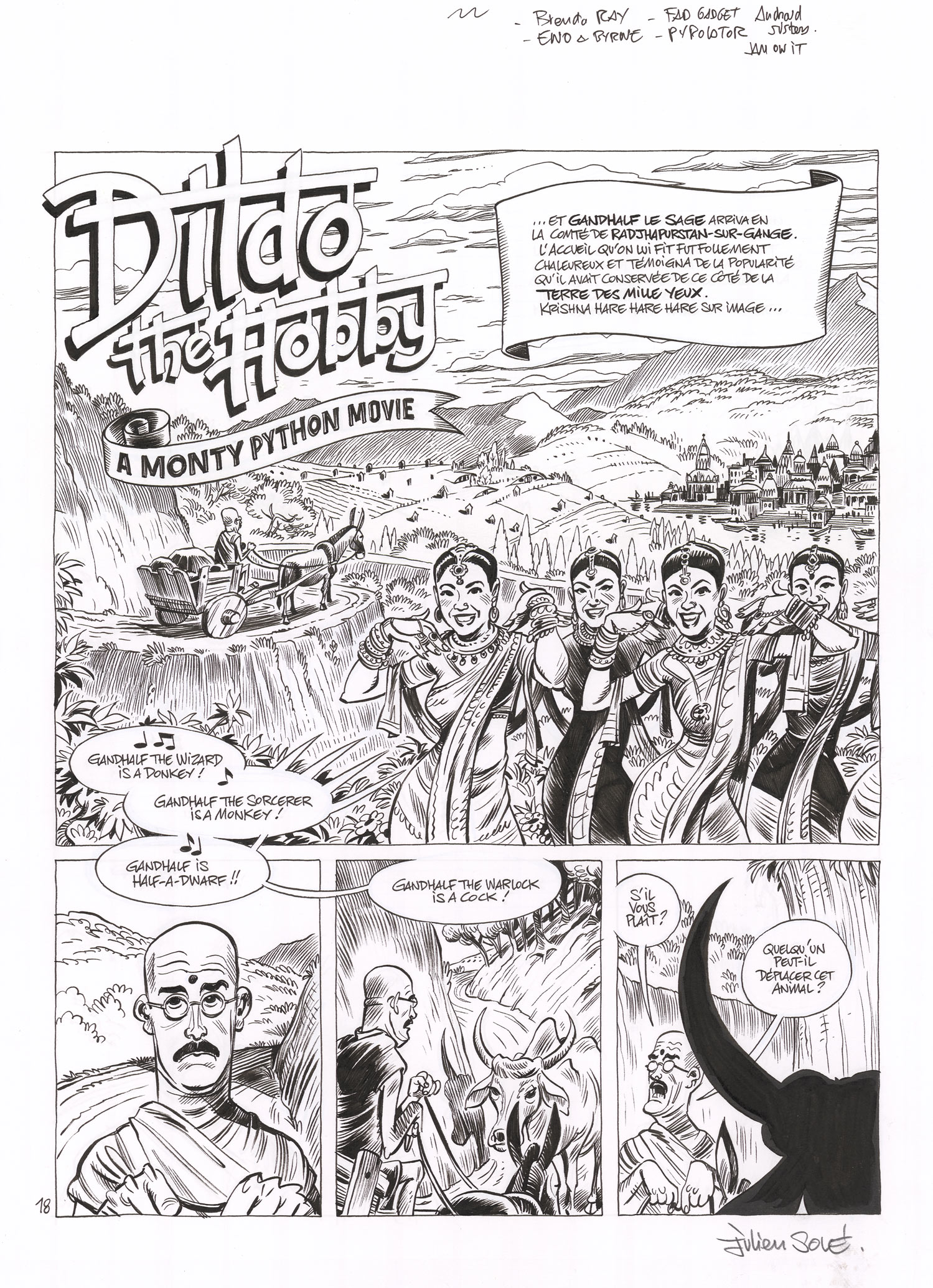 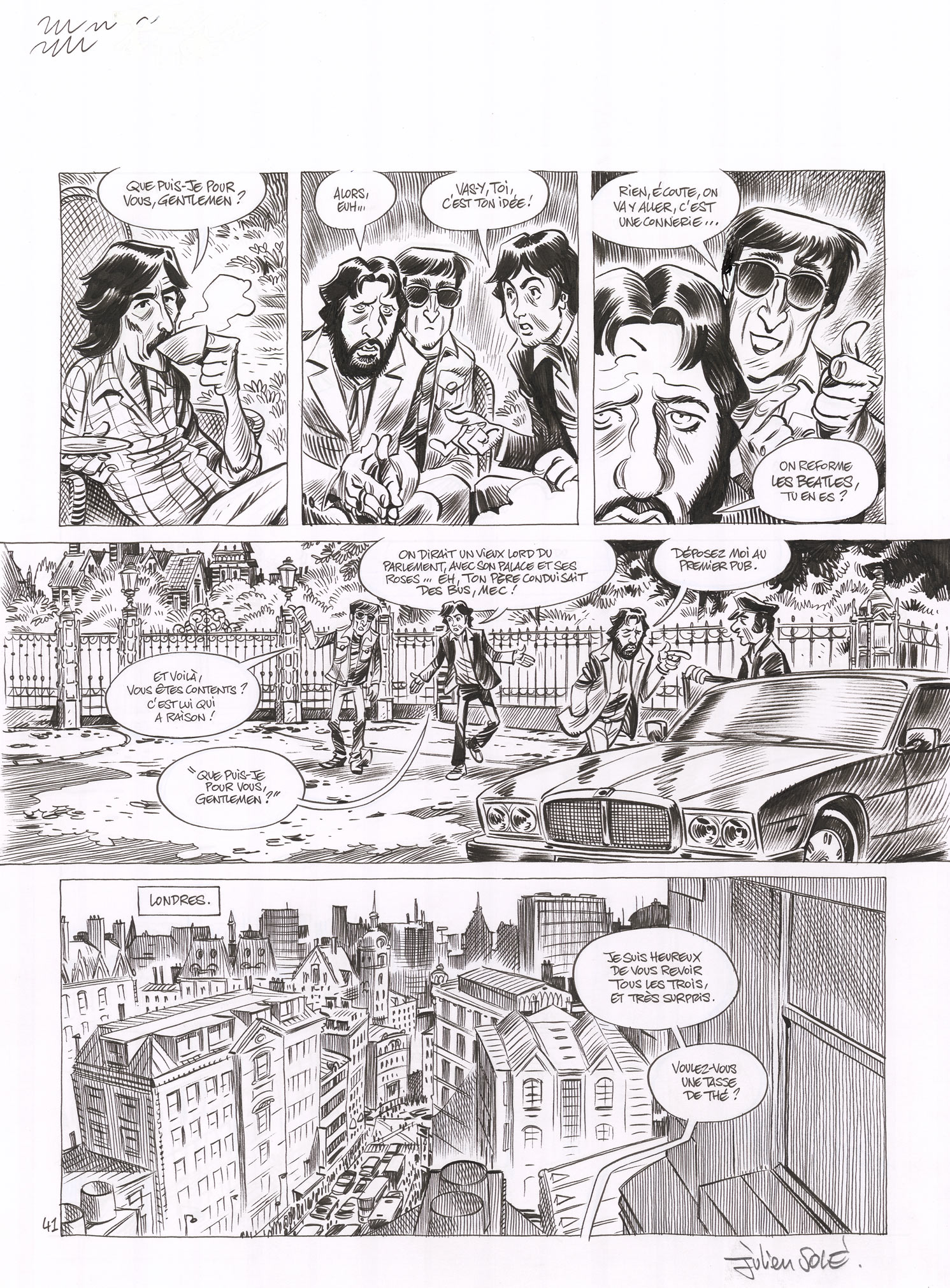 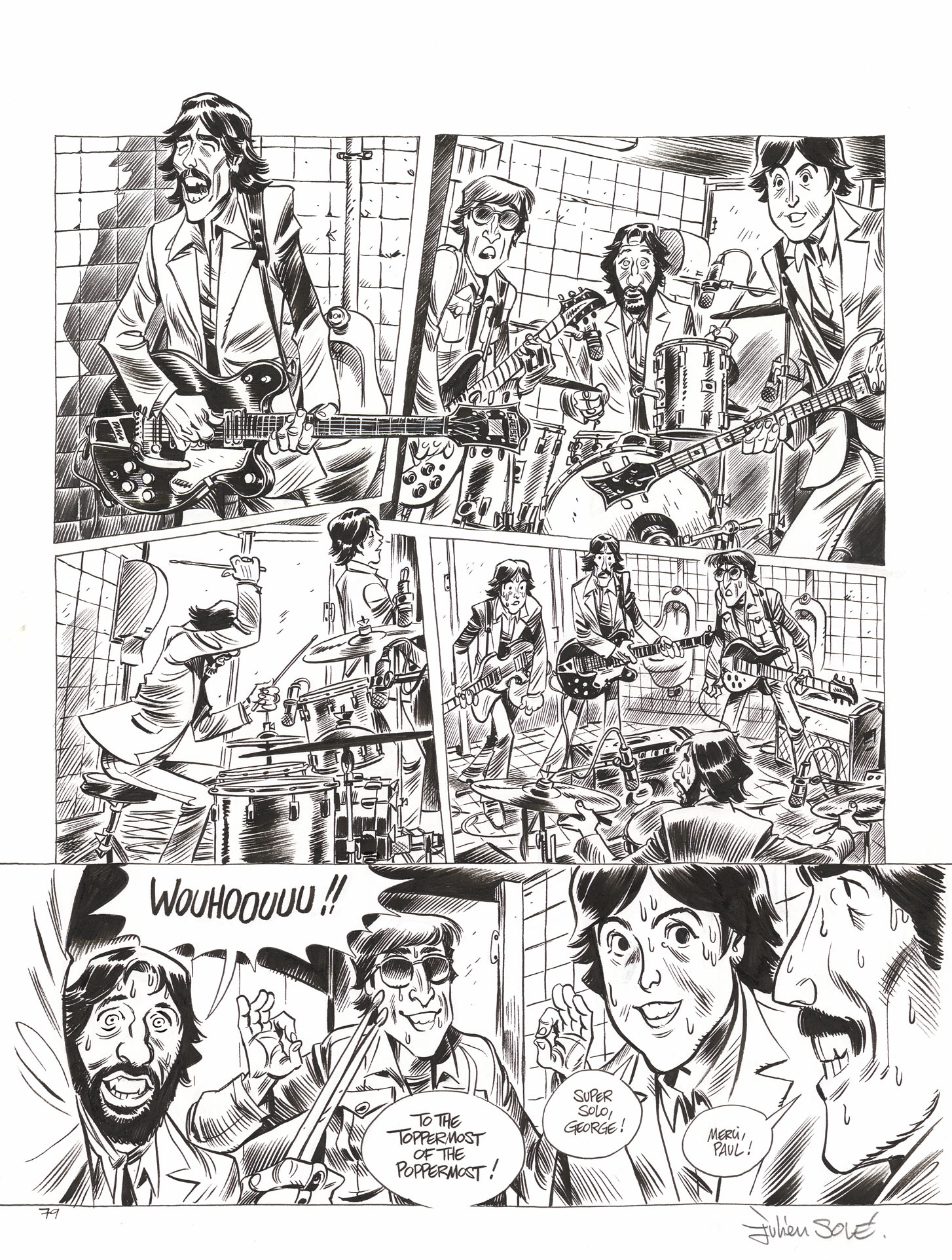 From 16 June to 2 July 2022, the Huberty & Breyne – Miromesnil gallery is delighted to be showing – in addition to various cover projects – the entire plates created by Julien Solé for his book about the Beatles. What makes these gorgeous plates, executed in Indian ink, particularly special is the sketch in pencil and blue crayon on the reverse side.

Retour à Liverpool (Futuropolis), which was published last autumn to huge critical and public acclaim, is a joyous alternative take on the history of the Beatles which imagines the band reforming in 1980.

Rigorously documented by the writer Hervé Bourhis, author of Petit livre rock and Petit livre Beatles (Dargaud), the story of the four musicians – who barely made it into the news in the era of post-punk and new wave – is carefully and affectionately illustrated by Julien Solé. We meet Yoko Ono and Linda McCartney, and the band’s producer, George Martin. We meet Monty Python and Maharishi Mahesh Yogi, founder of the TM movement, and Freddy Mercury and David Bowie at a party. And posters on street corners bring us face to face with The Cure and Joy Division in their heyday. This offering by Julien Solé and Hervé Bourhis is a paean to Rock & Roll, filled with references to actual events and real-life stories.

The book is dedicated, quite simply, “To my father” – to Jean Solé, a regular contributor to Fluide Glacial and the creator of a great many illustrations of the world of rock music, including album covers for Jimi Hendrix and Frank Zappa.

Born in Montreuil in 1971, Julien Solé adopted the pseudonym Julien/CDM at school when he co-created, with Ralph Meyer and Mo/CDM, the fanzine Chiures De Monde – an amalgamation of Tardi’s Chiures de gomme and Moebius’s Tueur de Monde. Following his studies at the Boulle and Duperré Schools, he began contributing to Fluide Glacial as an infographic artist and was involved in the creation of the magazine’s website. Since 1997, he has published regularly in Fluide, including À l’ouest de l’infini with Manu Larcenet; the humorous sci-fi series Cosmik Roger with Mo/CDM; The Zumbies, with Yan Lindingre, in which zombies meet rock music, and Monsieur Léon, the latest album in which series (a collaboration with Arnaud Le Gouëfflec) is due out in September 2022. For the last ten years, Solé has been collaborating with Fabcaro on Zéropédia, a humorous educational page for the magazine Science et Vie Junior (published as an anthology by Dargaud, with the second volume appearing in April). Working in the same realistic and ironic style, he has also tackled more serious subjects, such as Françafrique, for La Revue dessinée and in 2020 Le Seuil published Benalla et moi, a collaboration with Le Monde journalists Ariane Chemin and François Krug.

And, finally, Julien Solé has been cultivating a passion for sharks with the help of scientists at the Océanopolis aquarium in Brest, where the artist has been living since 2016. That was the year when he published Les Requins, les connaître pour les comprendre in La petite Bédéthèque des Savoirs (Le Lombard) with Bernard Séret, a marine biologist and internationally renowned shark expert. So, rock music and sharks… Welcome to the world of Julien Solé!