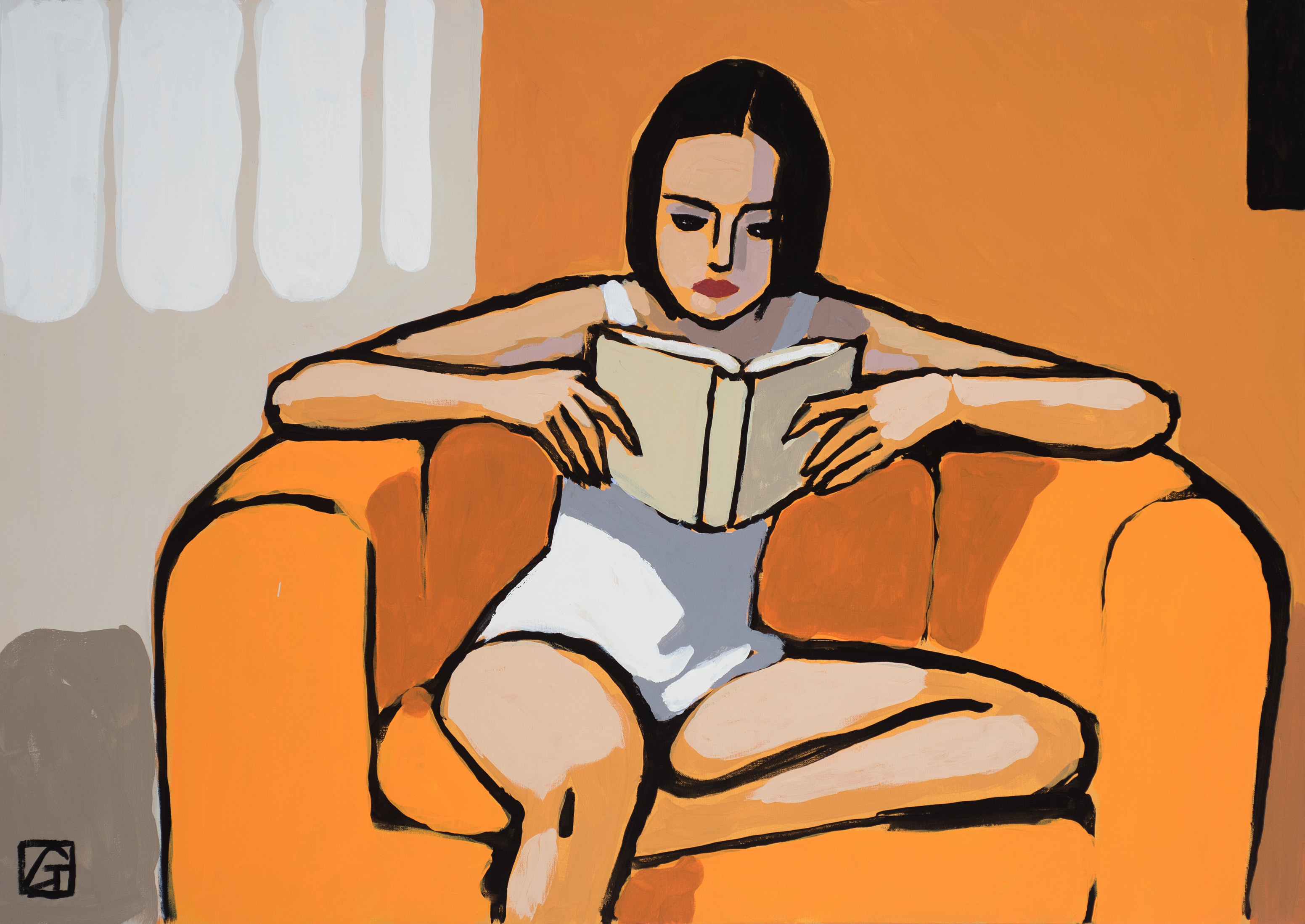 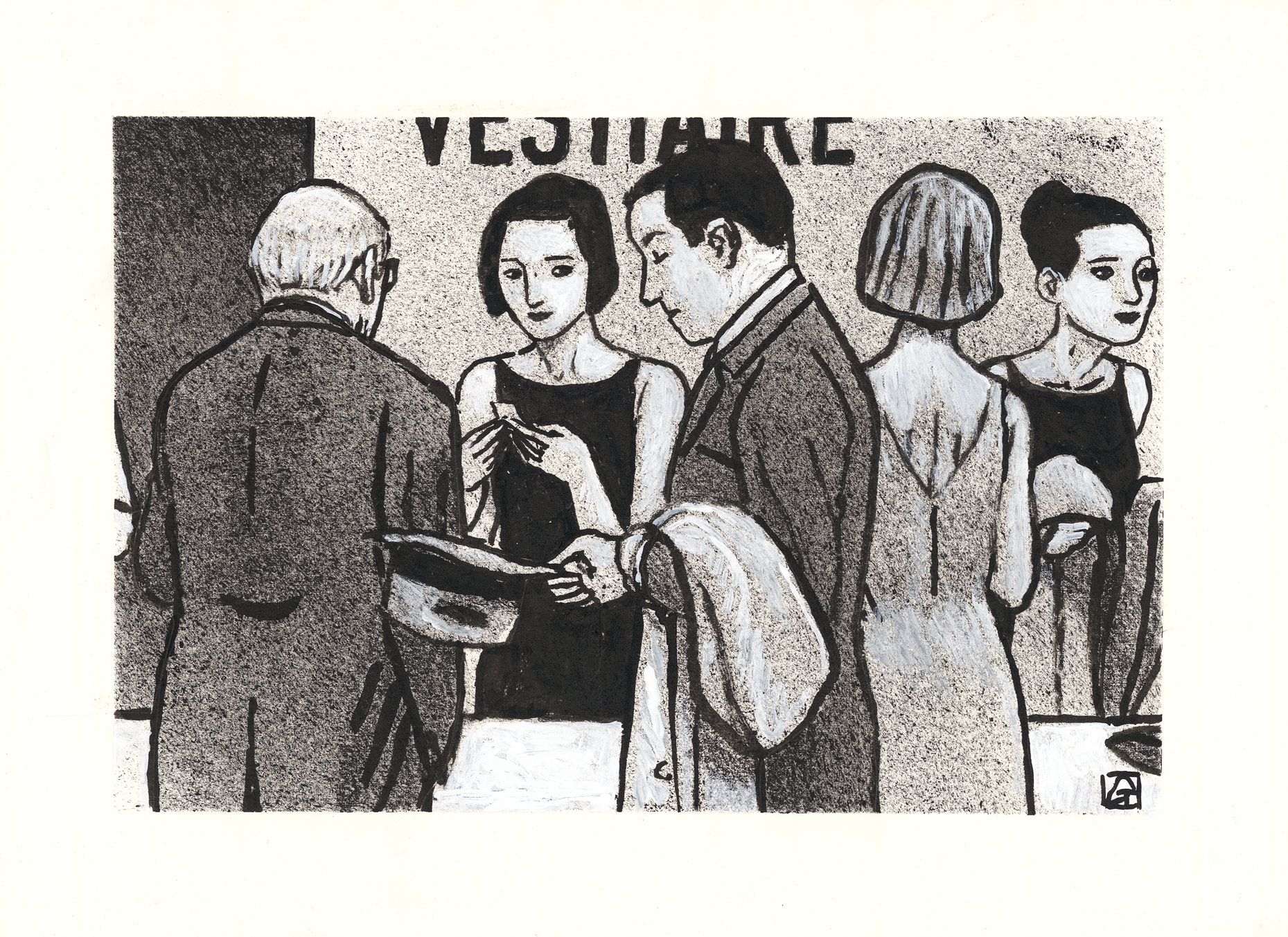 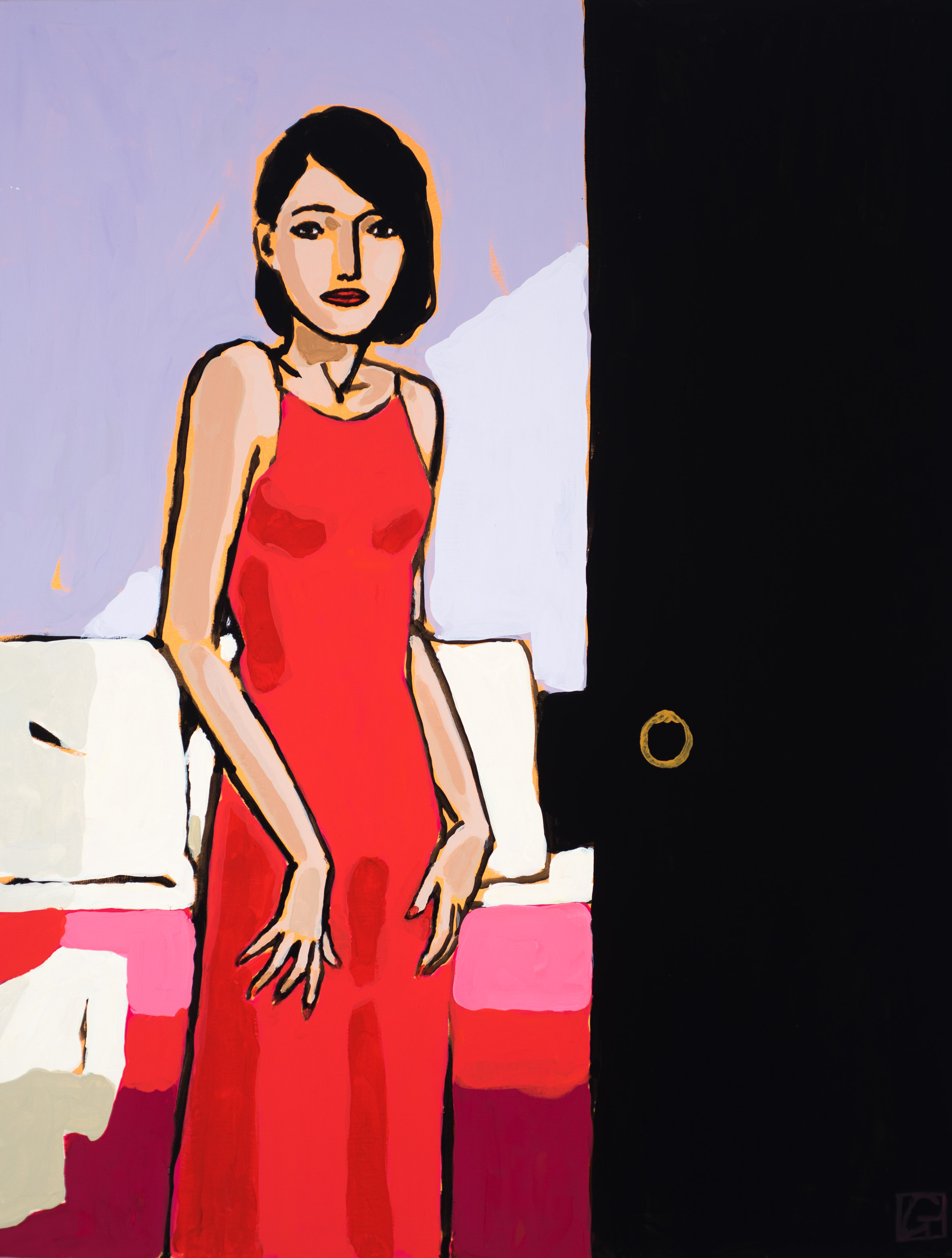 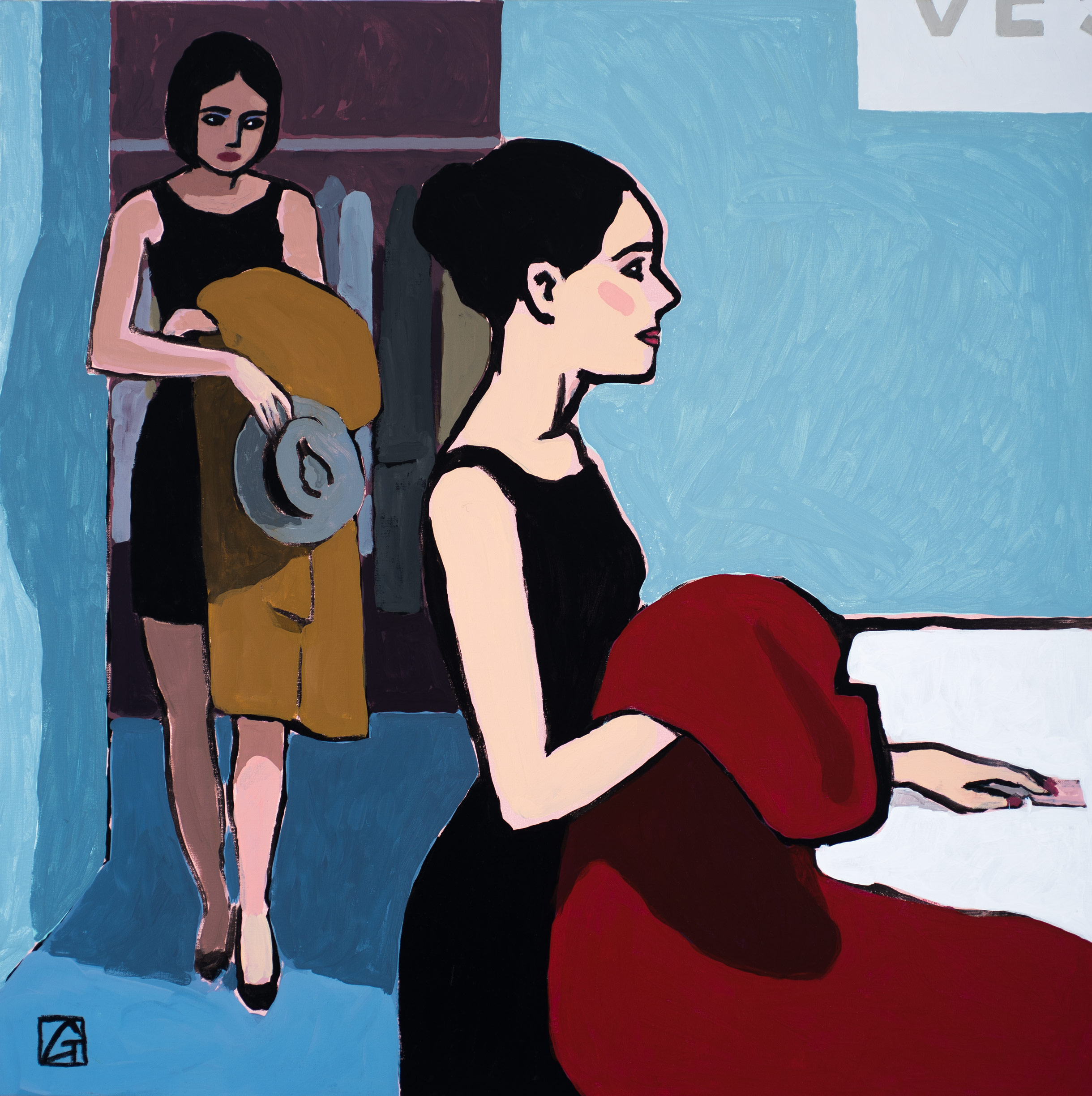 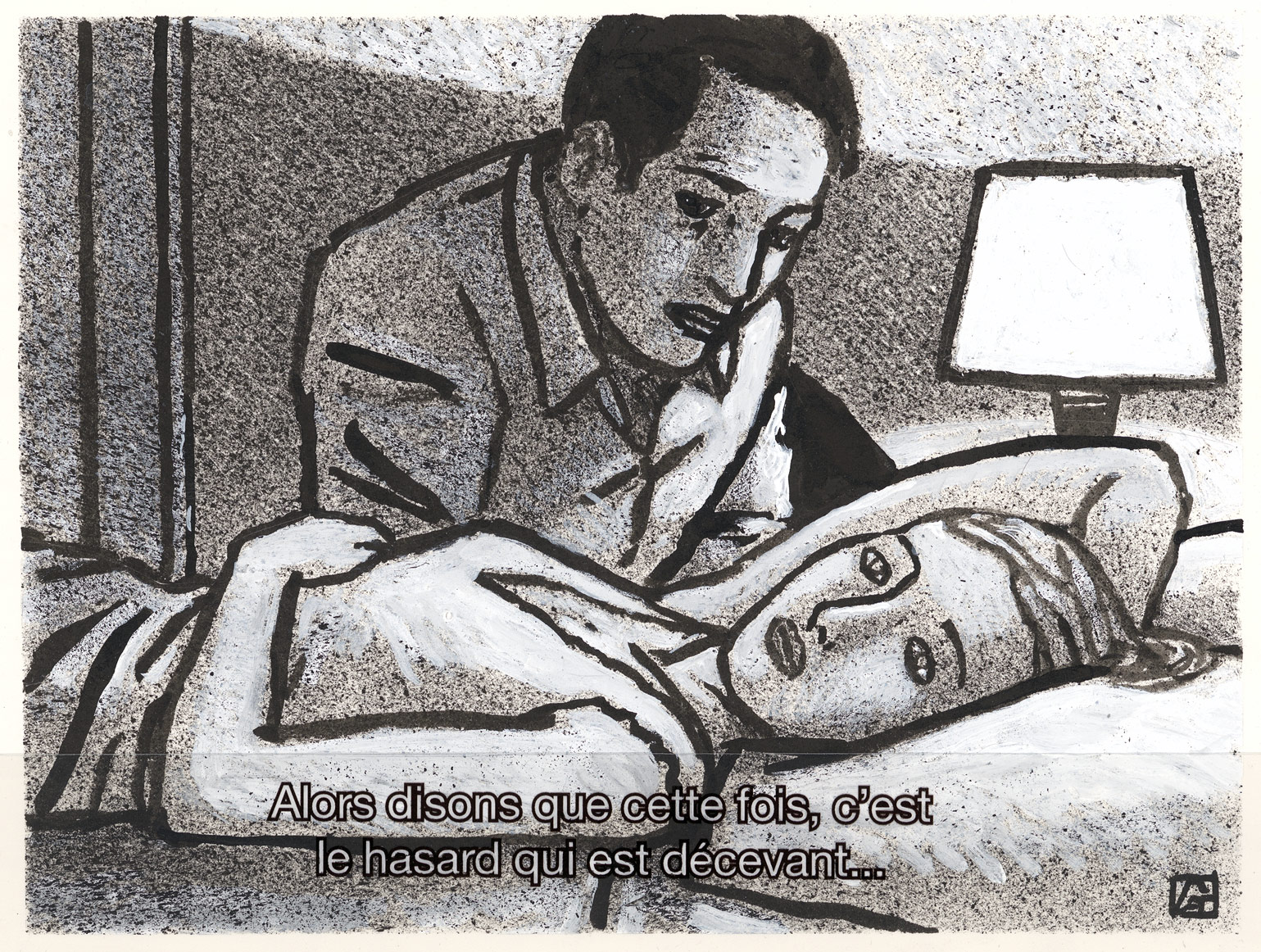 From 10 December 2021 to 8 January 2022, the Huberty & Breyne's Brussels gallery is delighted to be hosting an exhibition of the work of Jean-Claude Götting - an opportunity to discover all that the painter, illustrator, comic book artist and storyteller has been producing over the last year.

There will be a mixture of large-format and more intimate works on show, paintings on canvas sharing the gallery space with black-and-white drawings on paper. The common denominator uniting all these works is the act of looking, looking in whatever sense and from whatever perspective.

"Some forty or so of these hitherto unpublished drawings form part of a series entitled VOSTR (version originale sous-titrée [original version with subtitles]) which Rivages is bringing out, in late 2022, in Virages graphiques, a new collection dedicated to the 9th Art edited by Sonia Déchamps."

Black-and-white drawings with acrylic on paper, where the cinema comes into its own.

"These are fictional works but with subtitles appearing on strips of celluloid film beneath each drawing to encourage viewers to imagine their own movie. It's fairly vague - meant to be merely suggestive - but at the same time full of references to the kinds of film I enjoy, ones that have made a big impression on me, from New Wave, with Truffaut and his ilk, to early American thrillers."

"When I was young, I dreamt of making movies. I thought it would be straightforward, but now I see how much energy it requires just to "launch" a project... Four years to put a budget in place, that's more than I can cope with [he laughs]. If things don't move along fairly fast, that tends to interrupt my momentum and demotivate me. It's the same with my comic scripts. I can't stay focused on them for too long, or I am likely to become over-critical of my work. I need to keep feeling that buzz I get from the writing."

The gallery will also provide the venue for some animation in the form of four short films made by Jean-Claude Götting.

"The context Experimenting and having fun. I have a neighbour who makes animated films and seeing him at work made me want to have a go myself. These shorts are only a few minutes long. They represent some time out - a few days off work. They were an absolute pleasure to make."

It's official! Jean-Claude GÖTTING's latest comic album, Nouveaux Détours, has been nominated for the highly prestigious Fauve Polar SNCF, due to be awarded at the next Angoulême International Comics Festival, which runs from 27 to 30 January 2022.

In 1986, Futuropolis published a collection of dark short stories set in 1950s America entitled Détours. Some 30 years later, when Casterman brought out the new comic magazine Pandora, Jean-Claude Götting began writing his own Détours ? stories set in the same sort of motels and diners and barber shops in small-town America where ordinary folk grapple with what destiny has in store for them. Mixing suspense with humour, these stories would have found a perfect fit in the pulp magazines that featured the likes of William Irish and Fredric Brown.

Exceptional closure from 3 p.m. on December 24 to January 2.